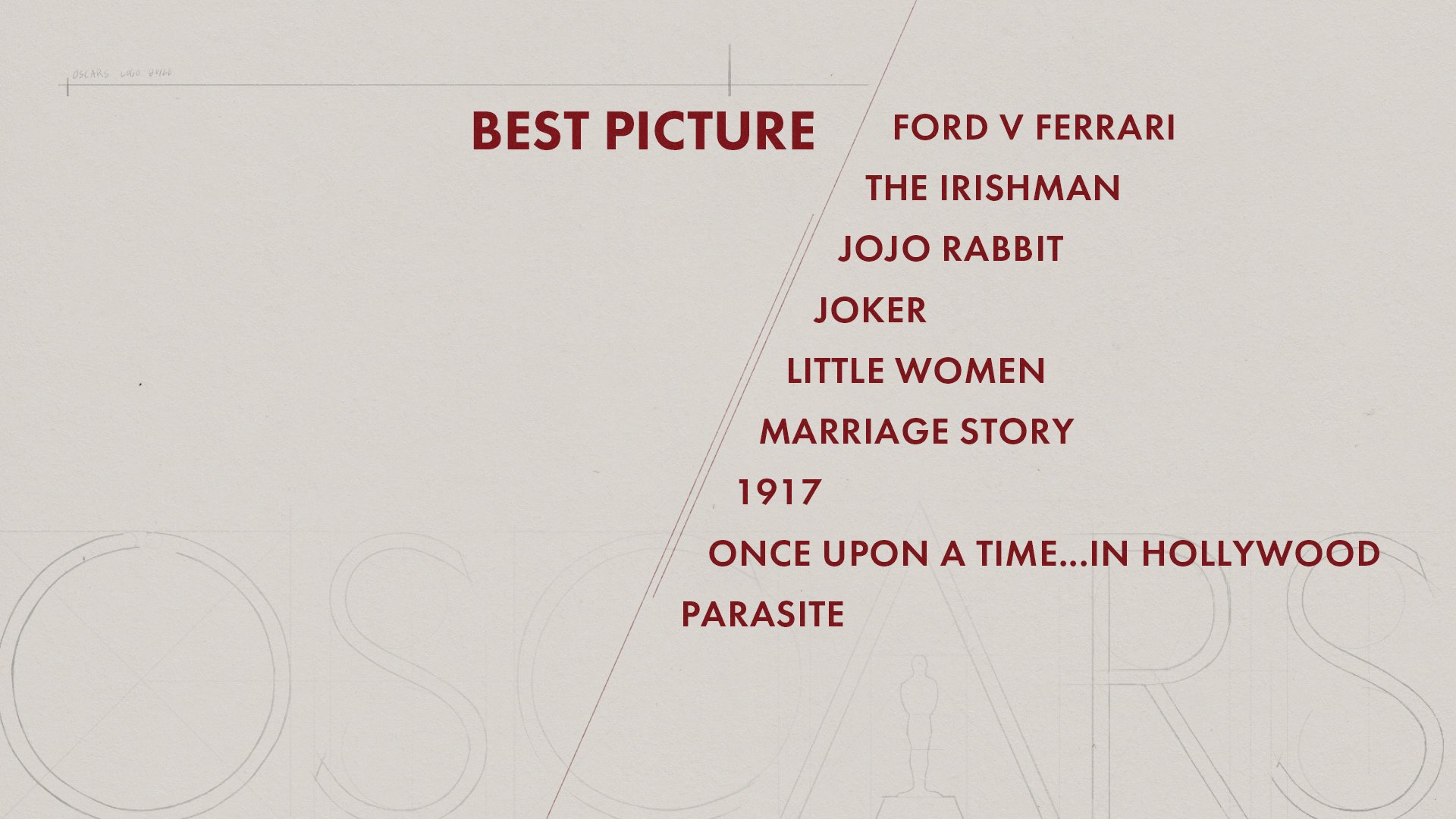 Now that you’re all caught up on my January hibernation strategy and evolving New Year’s tradition (if not click here), it’s time to take stock where I’m at on my #Race2TheOscars 2020. I made a list based on what the Internet could tell me MIGHT make Oscar nominations this year. Since then, I’ve been spending every Friday night and many weekend hours pursuing those glorious checks on my list. Let’s chat a bit about where my movie watching has intersected with the actual nominations.

LITTLE WOMEN MADE IT! Excuse me while I scream with joy, jump for joy, and pretend I can salvage that by turning it into goofy dancing. I saw the Greta Gerwig written-and-directed Little Women two weeks ago, and as my partner can attest, I have been in a YouTube hole ever since watching everything I can get my hands on about this movie. I’ve seen interviews with all the cast, behind-the-scene analysis, fan analysis, and a whole separate rabbit trail about Saoirse Ronan, Little Woman’s nominated lead, who I loved last year in (another Greta Gerwig directed movie) Lady Bird. It’s safe to call me obsessed. I’m planning a re-watch party of the 90’s version of the movie so I can continue my obsession far into another month or maybe two. Who wants to join?

What I loved: the brilliantly fresh take that on L.M. Montgomery’s well-known story that, somehow, perfectly captured the essence and intent of the original Civil-War era novel. Also, the incredible acting and beautiful cinematography. As others streamed out behind me in the theater, they complained about the parallel timelines of the movie–it shifts between the past of the girl’s childhood to the future of Jo trying to make it as an independent writer in the very male New York publishing world and Amy trying to make it as a painter in France. But I loved this new chronology. The juxtapositions offered insights to the character’s motivations, relationships, and eventual landing points. It added incredible tension to Jo’s (Saoirse Ronan) internal struggle. Agh, ok, this movie deserves another entire post or three. I’m rooting for it, 100%.

Parasite, though, was incredible and deserves to be on this list and I’m so happy to see it here. As a (somewhat ashamed) mono-lingual, I watched through subtitles and wasn’t distracted for one second. The plot is brilliant, but even before it takes you on its ride, you are drawn to the quirky, unpredictable characters. Just as you think you “get” that the movie’s theme is about wealth inequality with an “eat the rich” quality, the movie takes a sharp turn and you are plunged into the dark violence of that theme fleshed out. Watch it. I’m rooting for it too, so I guess I have to knock my previous 100% for Little Women by a few notches.

Marriage Story is a solid recommendation from me to anyone who cares. Both Scarlett Johansson (nominated for this movie) and Adam Driver create compelling binary leads and carry us believably through a relationship’s slow and painful dissolve. Somehow, with grace, humor, self-awareness, and lack of over-the-top drama. Yes, that one scene you’ve heard on the radio or watched in the trailer is very dramatic. But it’s almost the only one. And that, too, is incredibly relatable. At least to me. I loved this movie and have thought about it a lot since. It’s triumph: somehow spending nearly two and half hours taking viewers through each stage of a divorce–from high-minded idealism to disillusionment to each person’s worst self erupting cataclysmically into each other–while not remaining a dark movie. It has a lightness and humanness that defies the subject and all the assumptions we make about it.

Movies I saw and are barely worth mentioning: Once Upon a Time…in Hollywood

Movies I won’t watch despite being on this list: The Irishman

First of all, did NOT predict the movie Harriet— I think it is the only movie nominated for a major category that I literally know nothing about. Sadly, Just Mercy, didn’t make any of these three top categories or the supporting ones, and I was deeply inspired by that movie. But YAY for Saoirse Ronan, Scarlett Johansson, and Adam Driver. And WHAT a snub that Lupita Nyong’o (#OscarsSoWhite) is not on here. I don’t think I can watch Us and ever sleep again, but from what I hear, her performance deserves a spot. If you want some savage takes on this, just head over to black Twitter.

I’m ignoring all nominations for Once Upon a Time… because the screenplay and plot were complete and utter malarkey, but I will admit that DiCaprio can act the shit out of any role handed him. Antonio Banderas was extremely good in Pain and Glory which was an incredibly slow-moving movie carried completely by his character and some beautiful cinematography with a fun little twist ending.

I’m really looking forward to watching Judy and Bombshell, both woman leads and both dealing with real subjects and stories. I will reluctantly watch Joker and skeptically watch Two Popes but I’m very willing to be pleasantly surprised. Now let me go look up Harriet…

Ignoring Once Upon a Time and refusing to spend 3 hours of my life with gangsters in the Irishman means my excitement for the supporting males is narrowed and my choice is likely an easy one: Hanks. I betray my 20’s crush without even a nod to Pitt, and Hopkins could prove beguiling after watching Two Popes…but really. It’s Hanks, I think. I’m surprised his Mr. Roger’s depiction is the only aspect of this movie acknowledged by the Academy. However, Hanks does truly BECOME that character. In the one scene he stars straight into the camera for an uncomfortable period of time. In another he has the classic Daniel and King puppets out, leaning so hard into the role, it danced on the line of creepy for me. Mad respect for Hanks. Beautiful Day in the Neighborhood tells a fascinating story; the transitions are charming; and Hanks’ depiction is a driving force, you can’t look away.

Another YAY for Florence Pugh who, it could be argued, reinvented the character of Amy in Little Women. She crafts a oft-diminished antagonist into a complex foil for Jo. Laura Dern was so compelling in both Marriage Story and Little Women (as Marmie) that I am delighted to see her name here–don’t care for which movie. Another name on here, straddling categories and killing the Oscars game, is Margo Robbie who had a role in Once Upon a Time…(apparently, a movie impossible to ignore, despite my efforts). Can we give a slow clap to the queen, Johansson who is nominated for both lead and supporting roles?! I wonder how often that has ever happened in Oscar history. Adding that to the list under Harriet.

I have no idea if I’ll try to watch Richard Jewell just for Kathy Bates. Would it be worth it? Stay tuned.

I WILL be watching nominated animated and documentary shorts at my favorite, local art house theater the end of January. A good use of a winter afternoon.

I will NOT be watching live action shorts. In past years when I’ve made that commitment, I left the theater practically traumatized and in need of recovery for the rest of the day. No thank you. Our present timeline is dark enough without inviting two hours of the darkest parts of it into a weekend afternoon.

First, Greta Gerwig and Noah Baumbach are married and both their movies are up for Best Picture and they are each up individually in these screenplay categories. What. A. Power. Pair. Serious couple goals.

I’m definitely rooting for Greta (my bias is obvious at this point), but I will withhold a favorite in the original screenplay category until I can get my hands on Knives Out and see 1917. Parasite, as mentioned, deserves to be in this category because the writing, pacing, and plot are phenomenal. Phew, this category is going to be close for me.

Let us just have a moment of silence for the current Academy of directors who cannot see how dense they are for 1) continuing to have an all-male nomination list and, related, 2) for leaving Gerwig off this list when her movie and fingerprints are all over the other lists. That’s all I have to say about this list.

Oh, wait, and Tarantino with his affinity for gratuitous violence, eye-level automobile shots, weird nostalgia, and predictable style is overrated. Ok, now I’m done saying what I have to say about this list.

Oh, look! All the same movies (minus Maleficent…there’s always one) that are nominated for other categories. *dusts off hands* * high fives self*

I won’t even try…but good for them.

All of these categories provide me with ideas for movie-watching the rest of the year–especially the documentaries. I was hoping Big Little Farm would make the list because I very much enjoyed it. Also, they are STILL making Toy Story movies?! These animated features will make good movies when I’m out of Oscar-race mode and into a light laugh and distraction. Same for Maleficent…

I love this challenge. My love for movies continues to grow. My appreciation for everything it takes to make a good movie continues to grow. My winter hibernation is a happy. May you find a great movie to fall in love with before Oscar night. Let me know which dismissive opinion outlined here raised your hackles. Let me know who else is obsessed with Little Women because a very self-indulgent post is headed here in three…two…