In my last post, I shared my experience as a “Twitter Ambassador” at a recent conference. I ended up working with a principal who was already on Twitter, but wanted to engage her faculty with the social media tool. In conversation with her, I realized that sometimes, understanding Twitter (like understanding anything new) requires some metaphors.

In this post, I want to build on the idea that hashtags (#) are a way to have a public, real-time (or over-time conversation) conversation with other people on Twitter.  Hashtags= whiteboards at the front of the room where if everyone had a marker, he or she could publicly post their response to a prompt or write a message to that whole room. Now, let’s talk about how you would organize multiple conversations or metaphorically, if you had multiple whiteboards you were monitoring throughout your school. 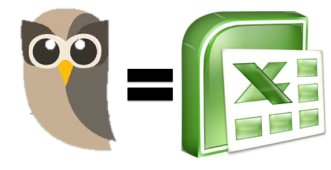 Along with Twitter’s rising popularity, a wave of apps have been created to interact with your twitter account and twitter feed. Two of the most popular are TweetDeck and HootSuite. I recommend the latter because in addition to a nice webpage, it also has an app for your iPhone, iPad, or Android. TweetDeck is an extension on Chrome and has a nice web page but no mobile apps.

Situation: After searching to make sure your own Twitter hashtag (Example: #WhitefordTchrs) was not being used by anyone else on Twitter (your search turned up no results), you now want to be able to follow ALL postings to Twitter with that hashtag. You also want to be updated immediately when people use the hashtag so that you can monitor comments and respond quickly.

Default Solution: Obsessively check your Twitter feed. Scroll down furiously and read everything to make sure you don’t miss any of your followers’ tweets with this hashtag. Then you go to the search box and type in the hashtag to make sure you see if anyone else on Twitter has used it. Repeat hourly.

App Solution: Use Hootsuite to aggregate** your conversation into easy-to-read streams of information like an excel spreadsheet!

Notice in the picture above that each “column” or as Hootsuite calls them “streams” represents one conversation happening around one hashtag. So if a principal asks her faculty to use one hashtag to discuss/share (#Whitefordtchrs), she could create another hashtag to start a Twitter conversation with students (#Whitefordstdnts), and still a third to communicate with parents (#Whitefordprnts).** Instead of having to track down all of the tweets with different hashtags within the Twitter app or website, the principal could simply create a stream on Hootsuite to visually organize the different conversations in one place…like an Excel spreadsheet.

Having your streams organized around hashtags ensures that you can involve anyone in the conversation without having to follow them on Twitter to see ALL of their personal updates.

later. Imagine: you sit down at your desk to plan out your week on Sunday and you create a tweet for each day. Then you schedule them, and respond each day to those who are engaging with your tweet–but the planning is thought out ahead of time and you are keeping your goal to engage multiple groups through this social media. Cool huh? There’s actually so much more that Hootsuite provides, but I will let you discover it when you go here to sign up for your own account 🙂

Part 3 of this short series will show you how to preserve a valuable and aggregate a valuable conversation for later or continued discussion. The next post will introduce you to another app that works with Twitter–Storify.