Today I was inspired by seeing students all over this country organize themselves around 17 minutes to honor the 17 victims of the Parkland High School shooting. A 17-minute walk-out, a 17-minute moment of silence, a 17-minute declaration that our students do not accept that their age requires them to be silent and compliant. This was an act of protest.

As I marched with millions of women in the historic 2017 Women’s March, I recognized the catalyzing power of being seen and heard collectively. I recognized the incredible disruption the march caused–public transportation was flooded, streets impossible, businesses overwhelmed, news cycle captivated. And that was exactly the point.

Effective activism contains layers of strategy and tactics all aimed toward a goal of changing the status quo or evolving beyond what has been done (or left undone) before. The physical act of protest–collectively gathering with others– is intentionally disruptive to daily schedules and patterns. This tactic is meant to be a jarring, attention-grabbing action that facilitates a new way of being heard and seen. Physical protests challenge the status quo in order to provoke response.

Leading up to today’s student-organized walk-out, there was understandably a lot of adult discomfort. Adults, after all, have created the very systems that the children are protesting. Adults run our systems of education and our systems of legislation. When this protest was planned, it provoked response, as intended.

From mockery to applause, a seemingly innocuous suggestion emerged. Instead of “walking out” why don’t we all “walk up.” 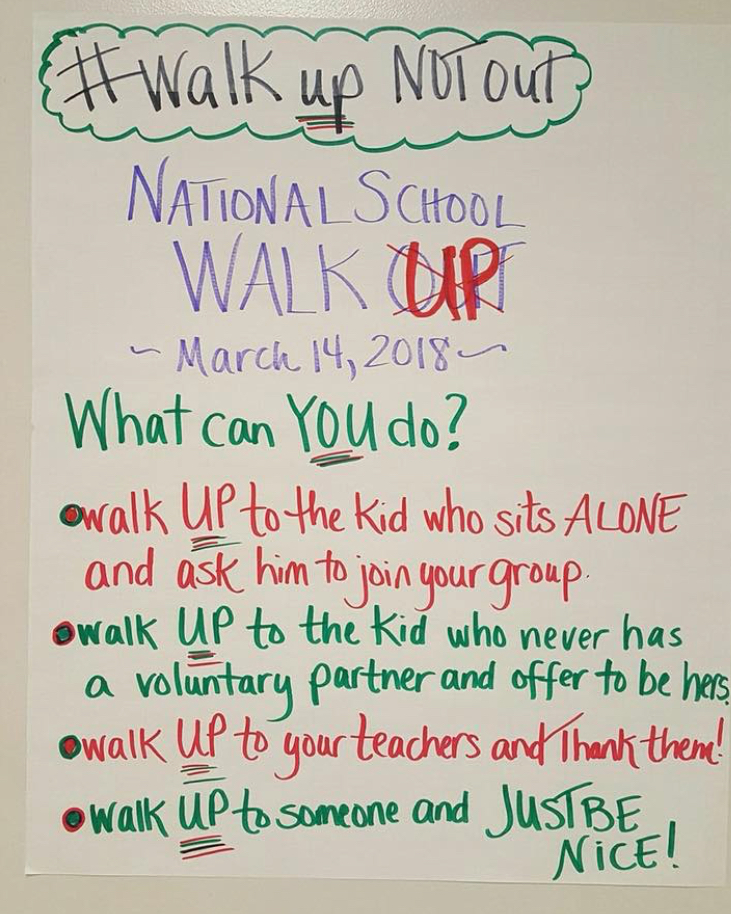 And as soon as I saw this along with the altered symbol of the “Walk Out” protest, my stomach twisted. Then, I became angry. But “why?” you might ask. Aren’t we supposed to be advocates of kindness? Isn’t love stronger than hate?

However, this Walk Up message isn’t that. How can you tell? Because it is packaged not only as an alternative to the physical act of protest but as the morally superior choice. And that makes me angry. This poster on this day with it’s capitalized “NOT” and it’s co-opted slogan and it’s glaring pink “X” is the pat on the head no one asked for and the advice no one wanted. This reaction comes from a place of either deep misunderstanding about the role and importance of physical protest or the deep discomfort with any act that cannot be packaged with a heart, smile, and hug.

Do NOT misunderstand me. I deeply believe in the kindness movement. I have strongly advocated for building deep empathy within ourselves, our students, and our classrooms. I believe the culture illustrated above is one that we should be constantly modeling and encouraging in our classrooms and schools. And that’s why I thought it was a damaging response from adults on this day of student-organized protest.

For physical protest to be effective, it must be disruptive. For kindness to be effective it must be embedded. These are parallel and complimentary actions, not opposing ones. You can protest and be kind. You can ask someone to join you and be condescending or unintentionally humiliating. The actions themselves are neither good or bad. It’s the context in which we encourage them and the intention with which we perform them. The kindest classrooms would recognize the deep grief and fear of students and support them in how they choose to express it. The kindest teachers would expect their students to be inclusive daily, grateful often, and polite consistently. They would not pit these actions as an alternative to a powerful act of empowerment and solidarity because they would understand that solidarity is an act of kindness.

More insidious in the message of “Walk up, not out” is the damaging message that students themselves may be able to prevent violence and trauma by merely being kind. We know that kindness and inclusion work to help hurting people heal. But it is dangerous to suggest that an invitation or hug could prevent a potentially suicidal and psychopathic person from inflicting harm to others. It may be part of a tapestry of support that prevents tragedy, but as an isolated action isn’t enough.

This message of “Just be nice” is particularly troubling when lobbed at young girls who are already told their entire existence is to be nurturing, polite, and nice. They are not expected to be assertive (“loud” or “bossy”), physical (“rough-and-tumble”) or angry. They are shamed by a society regularly for embodying many of the actions that are inherent to protest. When examining with the stories revealed in the #MeToo movement, there is a consistent pattern of girls and women internalizing sexism, abuse, and UNkindness because they believe that is exactly what they must do: “Just be nice” with the implied “at all costs.”

(I have a rant about the significant difference between being “nice” and being “kind” but it shall wait for another day, another post, or someone who goads me in the comments.)

Finally, this co-opting of the 17 minutes of protest by the countering “Walk Up” messaging is damaging because it undermines student empowerment and leadership which is what all educators should be striving to foster. It literally takes the phrase and subverts it into the opposite–don’t leave, stay. Don’t disrupt, encourage. Don’t be angry, smile. And even though staying, encouraging, and smiling are actions we should be supporting hundreds of times a day every day, we need to accept that a different paradigm was necessary for 17 minutes of THIS day in THIS week in THIS month of THIS year.

I’m frustrated by the false dichotomy that kindness and gratitude are not part of protest and protestors. I’m disappointed by adults attempting to assert their control over students rather than reflecting on how to mentor and support them. I’m angry at the insistence that “niceness” is the only moral strategy. And I’m ready to be loud about the lie that conflict avoidance is the moral choice.

Students who did not walk out should have been supported to grieve or express their opinions in varied ways. But it should be their choice. Adults should not have declared it to be the only acceptable choice. Teachers, we must do better in managing our own fear. Fear of healthy anger, fear of losing control, fear of conflict, fear of violence, fear of action, fear of perceptions, and fear of upsetting the status quo. We must manage these fears before they become the walls that barricade our students in and noise that silences our students’ voice.

Arial shot of our students self organizing into a peace sign at 10:00 today in Zurich, Switzerland in support of Stoneman Douglas School in Florida. #NationalStudentWalkout #empower pic.twitter.com/RMDrotDcqo

Student Walkout: Photos From Across the Nation https://t.co/kKHPYFenLO Powerful images of our kids

Please note: We have a snow day here in Boston so this is not about getting out of class. These kids showed up on a day when there was no school. https://t.co/CFZ4hggDeq

“The ultimate measure of a man is not where he stands in moments of comfort and convenience, but where he stands at times of challenge and controversy .” – Dr. Martin Luther King, Jr. #NationalWalkoutDay https://t.co/sBtJ0II6YG

BREAKING PHOTO: Students at an Atlanta high school banned from participating in the #NationalWalkoutDay demonstrations take a knee in their school hallway. pic.twitter.com/kynqnTeBub

Postscript: I saw the “Walk Out” suggestion surface from various adults on social media, but the credit for its origin is actually being ascribed to a parent of a Parkland victim. This post is aimed at the former group of adults and not the latter grieving father who has every right to make his own suggestion of change. See his tweet below.

6 thoughts on “On the False Dichotomy of Activism and Kindness”